The children from the primary school grade 4 (subject English) and the two BVS English groups carried out something new this winter: they spent an hour learning together as well as having some fun. 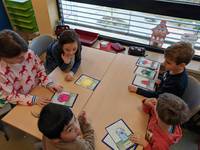 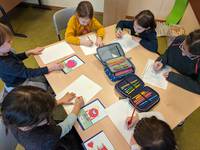 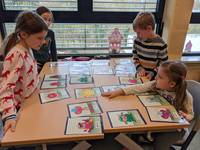 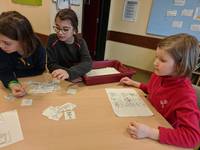 The ABC-children from the Yellow and Orange Groups visited the English class of the 4th grade, which had prepared several learning stations for their BVS counterparts: these stations were all based on comic monster figures.

One station offered the younger children the possibility to learn about opposites, while at another station both younger and older children played Bingo together.  A third station was created to introduce the children to story reading on a tablet computer.

The theatre station was especially captivating for the younger children as the older children used hand-made characters to perform little skits and stories that they had made up. In the last station, the 4th grade students read stories about the small fictive comic monsters to the kindergarten kids.

All in all, everyone had a great learning experience and a wonderful time, and the next visit is already planned. Thank you to the 4th grade and their teacher Mrs. Stiemans, for being super-heroes for their younger fellow students of the BVS !